Enter the 6-digit code from your Google authenticator app.

What You Should Know
About Voice Peering

If you’re a business owner, chances are you already have a Private Branch Exchange (PBX) installed at your office sites. You may also be considering purchasing or upgrading a Voice-over-IP (VoIP) solution for its rich feature set, scalable architecture and affordable call pricing. These products are also known as SIP trunking solutions (SIP = Session Initiation Protocol), as they implement a “trunk” of multiple digital telephone lines, and manage voice calls over the Internet using SIP. 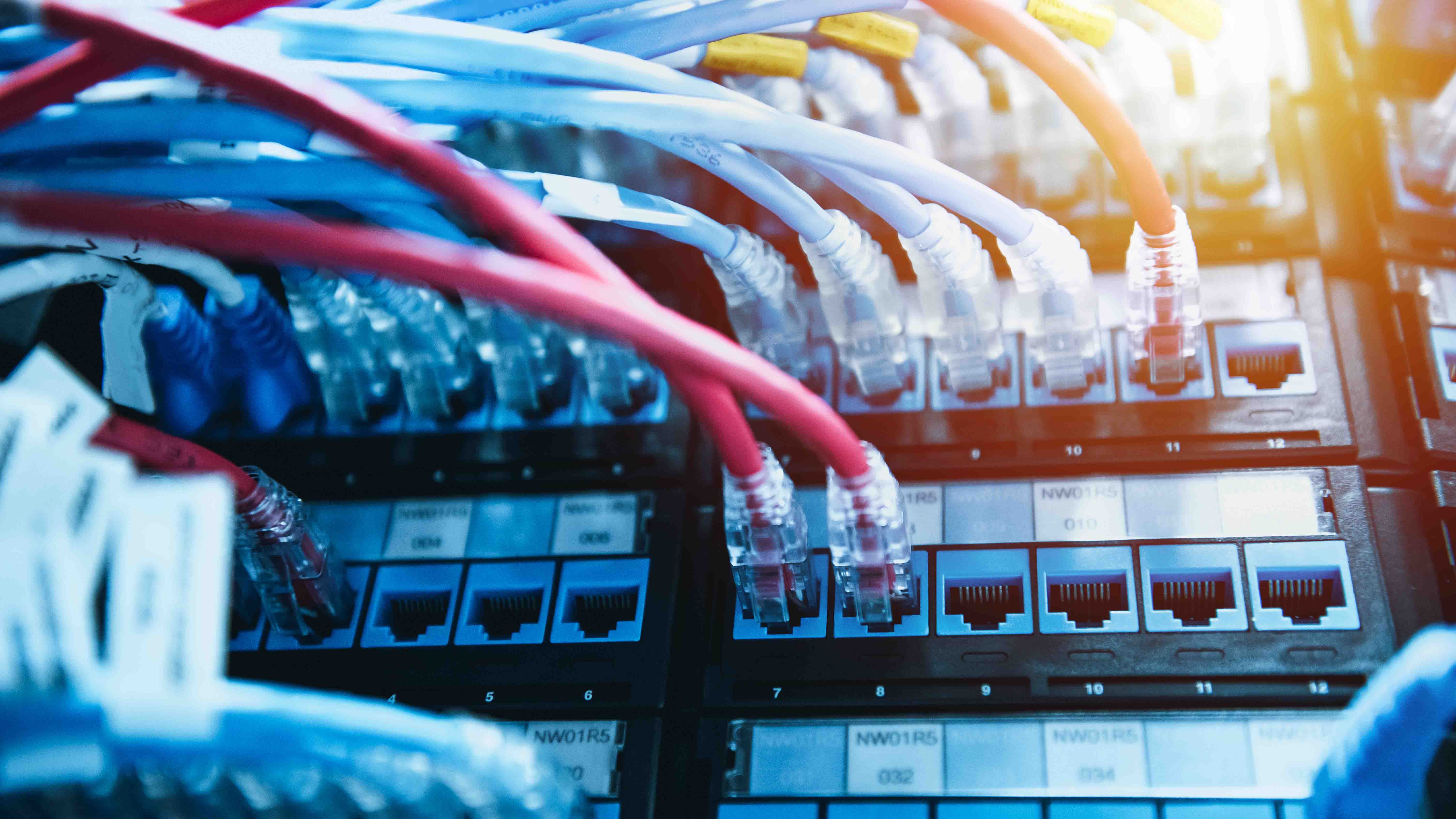 You may have encountered the term voice peering or VoIP peering in a description of SIP trunking architecture, and wondered what it means and how much you need to know about it. We hope this article will fill in the gaps and help you make an informed assessment of SIP trunking solutions.

What is Voice Peering?

If you don’t have a VoIP telephony provider, then your PBX connects to the Public Switched Telephone Network (PSTN). This means that the audio and control data transmitted from your PBX to the PSTN must conform to the PSTN’s standards, protocols and supported audio encodings. Of course, it also means that the calls your business makes are charged according to the PSTN telephony provider’s rates.
These days, voice and video calls can be made over the Internet for free, and the calls we do make over the phone are likely to be via mobile device. The demand for traditional, copper-wire landlines has dropped sharply and continues to plummet. Industry experts all agree that the PSTN is going the way of the woolly mammoth, whether it takes 5 or 10 years from now. It will be replaced by pure IP telephony—telephone calls made over the Internet.
A seamless, high-quality audio experience over a network can only be ensured if the audio packets are delivered in an uninterrupted and steady flow. Your router usually has a Quality of Service (QoS) feature that allows it to prioritize voice traffic over data. But the same does not apply to the entire Internet. We’ve all experienced halting, “jittery” voice and video calls over the Internet. So how can this problem be solved?
VoIP providers put considerable effort into ensuring that their customers’ voice traffic is not left entirely to the unpredictable environment of the public Internet. This is where voice peering comes in. VoIP providers create alternate network paths by establishing their own Points of Presence (PoP) in strategic global locations, and establishing peering agreements with other telecommunications carriers and providers. When two providers have a peering agreement, they both deploy network routers at the same physical location. The routers can be connected either at an Internet Exchange through an Ethernet switch (which allows for one network to connect to several other networks on the same switch), or through a cable running directly between the two routers.
The two peered providers come to an agreement regarding which and how much traffic each will accept from the other, and whether or not the traffic will incur charges. “Paid peering” (also known as “transit”) is usually agreed upon if one direction of traffic has significantly higher volume than the other.
The diagram below describes the various entities participating in calls, with and without voice peering: 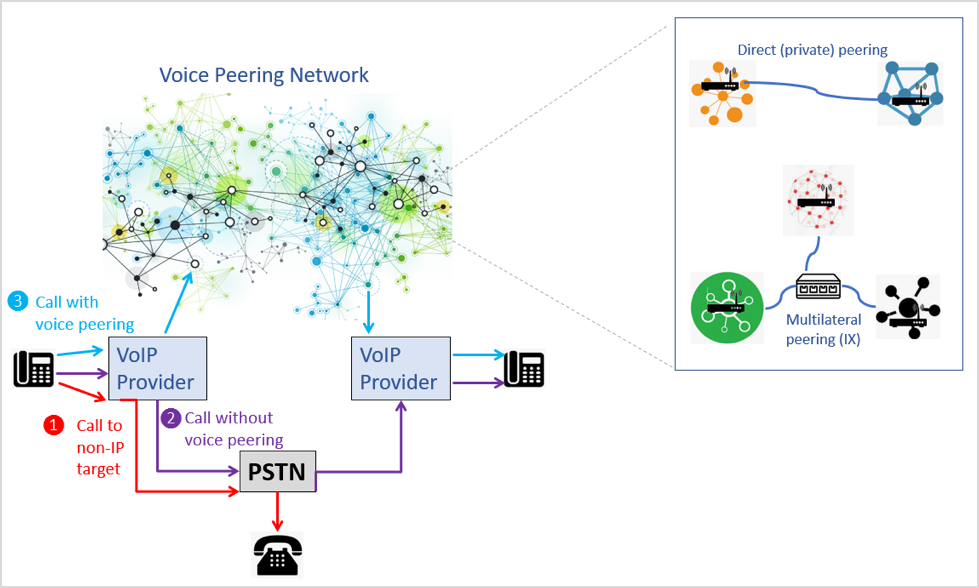 Voice peering has several advantages for VoIP providers and their clients:
- Bypassing PSTN – When one SIP trunking provider communicates directly with another, all of the rich call features (auto-attendant, call forwarding, voicemail to email, conference calling and more) are preserved. Wideband audio quality is preserved, rather than the audio being transcoded to the relatively inferior encodings that PSTN supports. And finally, a system that bypasses PSTN is ready for the near future, in which all PSTN systems will be retired.
- Cost reduction – Voice peering cuts out fees that would otherwise be paid to a 3rd-party carrier to transmit audio between the two participants. The peering agreement reduces those costs or eliminates them altogether. Those savings are passed along to the customer.
- Audio quality – Besides preserving high-resolution voice encoding quality as mentioned above, peering agreements create a faster alternative network, which allows the provider to carefully architect, control and scale the flow of its voice traffic. This minimizes problems of audio packet loss or lag.
- Security – By minimizing traffic legs over the public Internet, voice peering makes for a more secure, less hackable telephony network.

Now that we know what a voice peering network is, let’s take a look at what affects the quality of the voice calls flowing over that network, in terms of speed and reliability. It’s usually measured by these 3 factors:
- Percentage of lost packets – A lost voice packet will produce a gap in the audio flow.
- Latency – The time it takes to transmit a voice packet. If transmission speed goes below a certain minimum, there will be lags in the audio flow.
- Redundancy – The peering network must have a level of built-in redundancy, so that if an attempt to transmit via a certain route fails (e.g. due to a hardware issue), an alternate route is always available.

Questions to Ask When Choosing a VoIP Provider

- Besides the usual questions about feature set and cost of the VoIP solution, here are some things to ask providers regarding their voice peering infrastructure:
- How many Points of Presence does the provider have? Where are they located in relation to your offices?
- How many peering partners does the provider have and who are they? Are they reliable vendors?
- Does the provider use a Tier-1 network (a network that can reach every other network on the Internet solely via settlement-free interconnection)? Does the network provide for redundancy?
- How does the provider plan to scale its network for future growth?
- What are the provider’s packet loss and latency statistics? Look for a provider that meets the standard of 1% for packet loss and 150 milliseconds for latency, or less. If a provider refuses to supply these numbers, rule them out.

There’s no doubt that SIP trunking and voice peering will soon be the mediums for all voice (and multimedia) calls. Businesses are quickly adopting VoIP, especially those with large call volumes such as service centers. Given that business SIP trunking generally saves between 20% and 60% of communication costs, it’s not surprising that in 2017 about 70% of businesses in North America were already using SIP trunking, and the number is constantly growing.
We’ve now understood that a SIP trunk provider’s voice peering network is a fundamental part of its infrastructure, and has a crucial impact on the quality of its solution. We hope you keep some of these helpful tips in mind when considering your next provider.